This interview was originally published on June 3, 2014.  Jerry and Peter went on to have an outstanding season capped off by capturing the Team of the Year points title on the Central Walleye Trail. 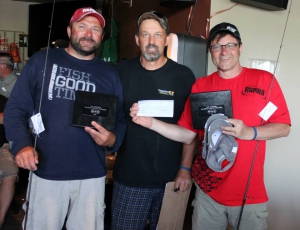 Tournament season is underway in the Manitoba and Northwest Ontario region.  The first walleye event is a big one as the 10th annual Russell Lions Prairie Classic takes place on June 7th and 8th on sprawling Lake of the Prairies near Russell MB.  I caught up with the veteran tourney duo of Peter Rogalka and Jerry Kruczek as they were preparing their rig leading up to next weekend’s tournament.  The anglers were busy doing some organizing ahead of a trip to Lac Du Bonnet the next morning to shake off some rust from a long winter.

I appreciate you guys taking the time to talk with me today.

Rogalka:  No! We’re not giving you any of our secrets.

Kruczek:  That’s right! We’re not telling you anything.

After some ground rules were set assuring them that no ‘secrets’ would be sought, the pair obliged me by inviting me on to their boat.  This season’s rig is a Kingfisher Flex TL 1825 with a 90hp Yamaha on the back.  Looking around, I see three high end Humminbird units anchored by an 1199ci HD SI at the tiller console.  Combined with a Minnkota Vantage 80lb thrust transom trolling motor and custom fitted splash guards, I can discern that these guys are serious about their walleye fishing.

How long have you guys been tournament partners for now?

Rogalka:  12 years.  We competed at our first tournament together in 2002.

How many events do you do a season?  Are they all walleye ones?

Kruczek:  Yes, we do about five, maybe six walleye tournaments.  Although, we do plan on fishing KBI (Kenora Bass International) this year.

This appears to come as a surprise to Peter.  I’m a little surprised as well, as I endured considerable ribbing earlier for my own professed preference for bass fishing.

Kruczek:  Bass would definitely be something different for us, although it would actually be a return to bass fishing for me personally.

Rogalka:  Hey Eric, you want to fish Lake of the Prairies?  Jerry needs a new partner.

About Lake of the Prairies, what’s that tournament like?

Kruczek:  It’s a well run event.  One of the organizers, Bob Ross, is a great guy.  The tournament is getting bigger every year.  The entry fee went up this year to $600 and they still have a 25 boat waiting list so the interest is there.  The prize money will keep going up too as a result.

The two-day tournament draws in teams from Saskatchewan, Manitoba and Ontario.  Last year’s event also had participants from as far away as Michigan and Wisconsin.   This year’s field will have 120 boats vying for a first place prize of $25,000.

How are you guys feeling going into the tournament?  Do you typically fish this event well?

Rogalka:  We’ll see.  We’ve done alright in the past.  Just like a lot of other events, you want to catch those perfect slotters.  But you do need a big one to win.

Provincial slot regulations on that body of water stipulate that no walleye over 45 cm and under 70 cm can be retained.  For this tournament, teams can weigh-in one kicker fish over 70 cm out of their five fish bag limit per day.  Peter and Jerry finished in 12th at last years’ event just two places out of the money.  They’ve had a couple of other top 20 finishes and finished one year in 8th.

What are some of the other tournaments that you enter?

Rogalka:  We fish the Red Lake Fall Classic every year which is by far my favourite one to fish.  We catch a lot of fish at Lake of the Prairies but it is a very wide open straight body of water.  In a 100 plus boat field everyone can more or less see each other.  I like Red Lake because there are a lot of walleye caught as well, but it is also more diverse as it is really a group of connected big shield lakes.

Kruczek:  We finished in 3rd place at Red Lake last year.  We’ve been close a few times and have had more than a few top 10’s at various events, but we haven’t won a tournament yet.  A highlight is finishing in 3rd place at the 2010 Vanity Cup in Nipawin, Saskatchewan.  We try to do that event every year as well.

The Vanity Cup is a prestigious event that attracts top walleye competitors from all over Canada and the US.  The tournament pays out over $300,000 in cash and prizes with last falls’ 1st place team taking home the $100,000 championship prize. 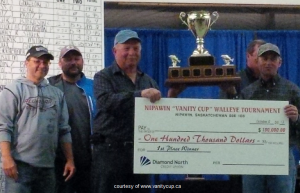 I have to ask, who is the MVP of this team?

Kruczek:  You catch the bigger ones.  Like that time when you caught the biggest walleye that we’ve ever weighed in.

Do you have any advice for people who are considering getting involved in the local tournament scene?

Rogalka:  It’s a small community really.  Generally everyone knows or at least knows of everyone else.  I haven’t met anyone who would have a problem with helping guys out who say haven’t done a tournament before.

Kruczek:  We want people to enter more tournaments or get involved.  Tournaments selling out is a good thing for the sport.

Jerry and Peter would like to thank their sponsors for this season:  Humminbird,Minnkota, Kingfisher, Rapala, Lucky Craft, Karavan, BlueFox and Trigger X.

Jerry is the president of Fish Futures Inc. which is a non-profit organization that is dedicated to the conservation and enhancement of freshwater fisheries.  For more information visit fishfutures.net.

Peter is the manager of Marlon Industries which manufactures Karavan trailers.  Ask your local boat/ATV dealer or visit karavantrailer.com for more information.

Please check your feed, the data was entered incorrectly.