As I sit here on a rainy Saturday organizing my tackle daydreaming of fiery top water Smallmouth Bass action, I can’t help but ponder what my upcoming fishing season has in store for me.  The first event for the tournament bass season in Manitoba and North Western Ontario is the newly named G-Loomis Skeleton Cup (which I will not be attending due to another tournament in Wisconsin).  This event draws between thirty and fifty teams annually and is organized by the oldest standing purely fishing club in the province, the Manitoba Bass Anglers.  The club, nearly forty years old has seen many changes over the years from members and executives, to volunteers and anglers.  The rich history of this club offers an alternative in a fishing club experience as most anglers in this province fish for Walleye.

The basis of this tournament is to offer a competitive, fun and difficult day to compete against each other.  What I mean by that is, because this tournament is on opening day there is no pre-fishing allowed on the lake days before the event.  This means there is no way to know where exactly the bass are located in their migration pattern on the first day of fishing.  Anglers’ first couple of hours during the tournament are typically ‘feeling out’ where the fish will be and how active they are in feeding thus leveling the playing field.  The anglers that succeed in finding the right combination of location and where they are in the pattern will be the ones who place well in this tournament. 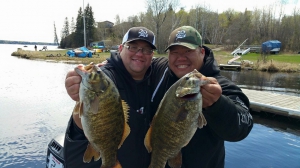 My partner, Garth Cheung, and I were very fortunate that we made the right decisions at the right time last year.  We started off slow working a soft plastic bite, and then when the sun started to really shine down on us, we switched to an active hard bait bite.  This year starts a new
chapter for this tournament in partnering with G-Loomis and promises to deliver a well-organized, well-run tournament that is competitive AND lots of fun!

Good luck to all the competitors this year and  rip some lip!